This is Reading List #18, a selection of recent Holocaust-related news stories and links from around the internet.

The Times of Israel reports on the road trip undertaken around Lithuania undertaken by Efraim Zuroff and Ruta Vanagaite that resulted in the book Our People: Discovering Lithuania’s Hidden Holocaust. Zuroff, well known as a Nazi-hunter, accompanied Vanagaite, a Lithuanian writer, to sites around the country connected with the murder of 95% of its pre-war Jewish population, and the difficult conversations they had about the Holocaust and the complicity of Lithuanians in the massacres that took place formed the basis for the book. It’s still a very controversial subject in Lithuania, though, and the article reflects on the fallout from the book’s original publication in the country in 2016. Our People was published in English earlier this year, and The Holocaust Reader will be covering it in more detail in the Autumn.

As mentioned in the recent New Books August 2020 post, Pan Macmillan Australia has just published 100-year-old Auschwitz survivor Eddie Jaku’s memoir, The Happiest Man On Earth. Last year, he spoke at a TEDx event in Sydney, and the video gives a useful impression of the way in which Jaku’s experiences affected his later life.

The Guardian reports on a new exhibition at London’s Wiener Holocaust Library exploring Jewish resistance to Nazi persecution and violence. As the article notes, the subject is still little understood beyond specialist circles; for years survivors faced accusations that they and others failed to fight back against the Nazis and their collaborators, and many examples demonstrate this to be simply untrue. The exhibition brings together previously unseen documents that tell the stories of individuals such as Tosia Altman, who smuggled herself into ghettos in occupied Poland in order to spread information and help organise resistance. More information can be found at the Wiener Library’s website; their exhibition runs until the end of November 2020.

YouTube channel Memoirs of WWII brings the story of Auschwitz survivor David Wisnia in his own words. David was born in Warsaw and, by chance, was not home when German officers murdered his family. He was sent to Auschwitz and later managed to escape during transportation to another concentration camp. He happened upon a division of US troops, whose ranks he joined as an interpreter. Last year, the New York Times reported on his reunion with a woman with whom he had managed to have a romantic relationship while imprisoned at Auschwitz.

The header image shows woodland in Lithuania. Many of the sites of mass murder in Lithuania lie within the country’s vast forests. Image by lloorraa from Pixabay.

The Holocaust Reader is a blog dedicated to Holocaust-related literature, film and other media and is written by Andrew Morris. 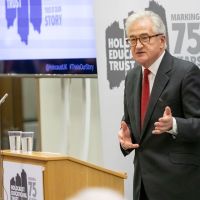