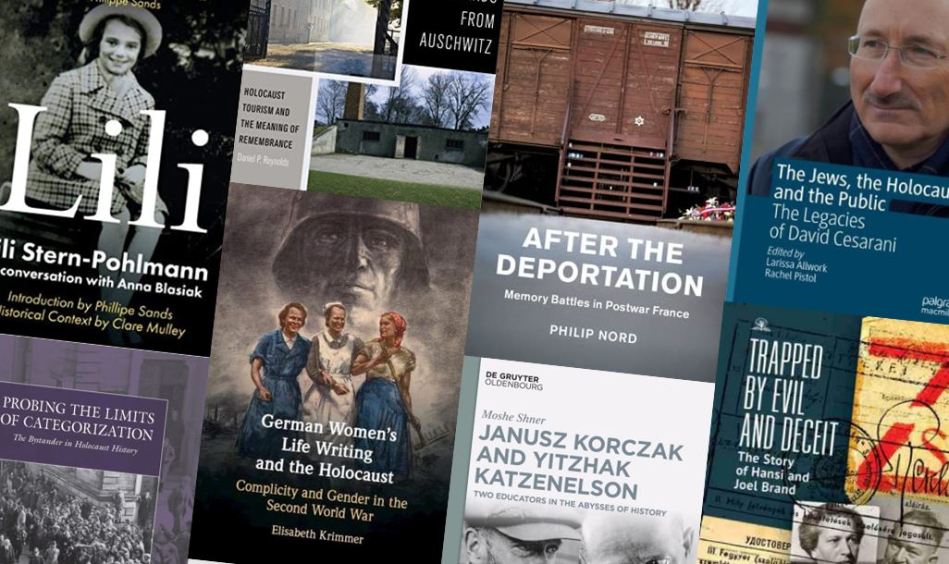 A selection of new books on the Holocaust and related topics, published in December 2020.

From the publisher, Holland House Books:

The story of Lili Pohlmann’s childhood and survival. During the Second World War she was helped by many people, including a German woman working for the Nazi occupying forces in Lemberg, and a Greek Catholic Metropolitan Archbishop. After the war Lili came to London in the first transport of Jewish children from Poland.

German Women’s Life Writing and the Holocaust: Complicity and Gender in the Second World War by Elisabeth Krimmer

From the publisher, Cambridge University Press:

This important study examines women’s life writing about the Second World War and the Holocaust, such as memoirs, diaries, docunovels, and autobiographically inspired fiction. Through a historical and literary study of the complex relationship between gender, genocide, and female agency, the analyzes correct androcentric views of the Second World War and seek to further our understanding of a group that, although crucial to the functioning of the National Socialist regime, has often been overlooked: that of the complicit bystander. Chapters on army auxiliaries, nurses, female refugees, rape victims, and Holocaust survivors analyze women’s motivations for enlisting in the National Socialist cause, as well as for their continuing support for the regime and, in some cases, their growing estrangement from it. The readings allow insights into the nature of complicity itself, the emergence of violence in civil society, and the possibility of social justice.

Postcards from Auschwitz: Holocaust Tourism and the Meaning of Remembrance by Daniel P. Reynolds

Each year, millions of people visit Holocaust memorials and museums, with the number of tourists steadily on the rise. What lies behind the phenomenon of “Holocaust tourism” and what role do its participants play in shaping how we remember and think about the Holocaust?

In Postcards from Auschwitz, Daniel P. Reynolds argues that tourism to former concentration camps, ghettos, and other places associated with the Nazi genocide of European Jewry has become an increasingly vital component in the evolving collective remembrance of the Holocaust. Responding to the tendency to dismiss tourism as commercial, superficial, or voyeuristic, Reynolds insists that we take a closer look at a phenomenon that has global reach, takes many forms, and serves many interests.

The book focuses on some of the most prominent sites of mass murder in Europe, and then expands outward to more recent memorial museums. Reynolds provides a historically-informed account of the different forces that have shaped Holocaust tourism since 1945, including Cold War politics, the sudden emergence of the “memory boom” beginning in the 1980s, and the awareness that eyewitnesses to the Holocaust are passing away. Based on his on-site explorations, the contributions from researchers in Holocaust studies and tourism studies, and the observations of tourists themselves, this book reveals how tourism is an important part of efforts to understand and remember the Holocaust, an event that continues to challenge ideals about humanity and our capacity to learn from the past.

Probing the Limits of Categorization: The Bystander in Holocaust History – War and Genocide edited by Christina Morina and Krijn Thijs

From the publisher, Berghahn books:

Of the three categories that Raul Hilberg developed in his analysis of the Holocaust-perpetrators, victims, and bystanders-it is the last that is the broadest and most difficult to pinpoint. Described by Hilberg as those who were “once a part of this history,” bystanders present unique challenges for those seeking to understand the decisions, attitudes, and self-understanding of historical actors who were neither obviously the instigators nor the targets of Nazi crimes. Combining historiographical, conceptual, and empirical perspectives on the bystander, the case studies in this book provide powerful insights into the complex social processes that accompany state-sponsored genocidal violence.

After the Deportation: Memory Battles in Postwar France – Studies in the Social and Cultural History of Modern Warfare by Philip Nord

From the publisher, Cambridge University Press:

A total of 160,000 people, a mix of resistants and Jews, were deported from France to camps in Central and Eastern Europe during the Second World War. In this compelling new study, Philip Nord addresses how the Deportation, as it came to be known, was remembered after the war and how Deportation memory from the very outset, became politicized against the backdrop of changing domestic and international contexts. He shows how the Deportation generated competing narratives – Jewish, Catholic, Communist, and Gaullist – and analyzes the stories told by and about deportees after the war and how these stories were given form in literature, art, film, monuments, and ceremonials.

Janusz Korczak and Yitzhak Katzenelson: Two Educators in the Abysses of History by Moshe Shner

From the publisher, De Gruyter:

The twentieth century left humanity in despair. Two World Wars caused the death of more than seventy million people. The Holocaust of the Jews and genocide against other groups left us the images of factories of death and names of unimagined cruelty. Humanity learned about its unlimited ability to inflict suffering and death. Hell appeared as a human-made reality. Two educators, the Polish-Jewish educator and children’s rights advocate Janusz Korczak (murdered in Treblinka in 1942), and Yitzhak Katzenelson, a Bible teacher, dramatist and a poet (murdered in Auschwitz in 1944), shared the same historical reality but responded in very different ways. A comparative study of their legacies leads explores questions of identity, leadership, and the educators’ role in the face of totalitarianism, terror and genocide. The book may appeal to teachers in all disciplines who deal with their identity as educators, and to historians and civic rights activists in any society, culture or nationality.

The Jews, the Holocaust, and the Public: The Legacies of David Cesarani – The Holocaust and its Contexts edited by Larissa Allwork and Rachel Pistol

From the publisher, Palgrave:

This book explores the work and legacy of Professor David Cesarani OBE, a leading British scholar and expert on Jewish history who helped to shape Holocaust research, remembrance and education in the UK. It is a unique combination of chapters produced by researchers, curators and commemoration activists who either worked with and/or were taught by the late Cesarani. The chapters in this collection consider the legacies of Cesarani’s contribution to the discipline of history and the practice of public history. The contributors offer reflections on Cesarani’s approach and provide new insights into the study of Anglo-Jewish history, immigrants and minorities and the history and public legacies of the Holocaust.

Trapped by Evil and Deceit: The Story of Hansi and Joel Brand by Daniel Brand

From the publisher, Academic Studies Press:

When the Holocaust broke out in Europe, Hansi and Joel Brand were joined by Israel (Rezso) Kasztner to launch an organized effort to save thousands of human lives. Their efforts, which involved playing a dangerous bluffing game against the Nazi regime, helped to end the Auschwitz extermination. Their success put them at odds with the political machine of the young state of Israel. Politicians wanted the public to believe that there was nothing they could do, a sentiment which many still believe to this day. This cover-up led to Israel’s first politically-motivated homicide.

If you are publishing a book on the Holocaust or related topics and would like to suggest its inclusion in future New Books roundups, please get in touch via the contact page.

Inclusion of titles on this list does not represent endorsement of their contents.